An innocuous little phrase, you’d think. Maybe it was, once, though I suppose it was always a companion to hyperbole or outright lies, and has probably always served as a sort of red flag to the average listener. If somebody says “I know what I’m talking about, believe me”, most of us would suspect that actually, the speaker knows jack.

Still, it’s just a common verbal tic, nothing to get all worked up about, just one of those “tells” that find their way into dishonest conversation. How is it, then, that such a simple, over-used phrase could have morphed into something I can’t hear without feeling a diabolical urge to plunge a standard #2 HB pencil straight through my own eye socket and into my seething, tortured brain, skewering it like a chunk of beef on a shish kebab?

Trump. TRUMP!! That’s how. “Believe me” belongs to Donald now, it’s just one more thing he’s appropriated. Maybe it’s not even deliberate. His constant, grating use of the words may arise out of sheer necessity, “believe me” being one of the 120-odd expressions he can cobble together out of the 400-odd words he knows. Or maybe it’s just something your average flim-flam man uses automatically for garnish when he’s gulling the yokels. Perhaps he just blabs it by reflex, the way some people annoyingly sprinkle “you know” into their sentences, or “like”: you know, he’s like, “believe me”, and I’m like, “please for the love of Sweet Jesus stop saying that”, but he can’t, you know, like stop.

Listen for it. I want you to hurt like I do. Suffer along with me. Wince and grind your molars while he says it all the time, because folks, he says it all the time, and by that, I mean all the time. Over and over. Again, and again, and again. Every second frigging sentence, it’s “believe me”, and it’s always after some hilariously transparent lie or ridiculous boast. “I know more than any of the Generals, believe me”. “It’s going to be so simple folks, and happen so fast, your heads will spin, believe me”. “We’re going to win so much you’ll be tired of winning, believe me”. “Believe me, Mexico is going to pay for that wall, and they will because I’ll make them, believe me”.

And they do! They believe him!

They seem to, anyway. Maybe they don’t, not really. The pundits claim his crowds simply don’t care, that of course they know he lies like a rug, but they love the sound of it, mainly because it pisses off the despised liberals and coastal elites. That’s why he can spend an entire campaign assuring the mob that Mexico’s going to pay for his cockamamie wall, then get cheers when he threatens to shut down the government unless Congress makes the U.S. taxpayer foot the bill. That’s why he can deny saying things that anyone with a PVR can easily prove he really did say, usually as recently as yesterday. That’s why it doesn’t matter when nothing he promises ever happens. They love the attitude. They love that he wants what they want, and hates who they hate. The Donald is payback. They put him in the Oval, and now all those stinking establishment types can suck it.

Has anyone studied the overlap between Trump voters and rabid fans of professional wrestling?  It just has to be like this: 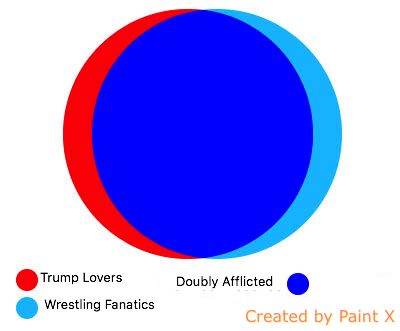 If you’re a normal sort of person, who watches normal things on TV, you might not recall how the Donald used to be tight with the World Wrestling Federation. He was practically a regular for a while there, and seems to have learned most of his rhetorical tricks by watching the real professionals work the crowd. Watch him as he studies at the feet of the masters:

The people who attend these recreations of the last days of Rome don’t give a mangy polecat’s tuckus that it’s all fake. C’mon, they know that you can’t stomp on a guy’s trachea without really hurting him. Most everybody has banged the ol’ noggin on a door frame at some point – they know how much it hurts. They’ve seen the little stars and birdies. You don’t need a degree in applied algebraic topology to know what would happen if you really smashed a guy’s forehead against a turnbuckle 20 straight times. Who cares? It’s fun! They get to hoot and holler, froth at the mouth, and jump up and down. There are heroes to cheer and villains to boo, it’s cathartic. Just like a Trump rally.

It lasts about ten minutes. Mind yourself, now; anything over 90 seconds of exposure can do permanent damage. After that, even if you stop in time to prevent any obvious immediate problems, you’ll be primed to off yourself at the very next exposure, however brief. It might be better not to watch.

I wish I’d followed that advice myself. I just watched the entire brain-rotting compilation, and if I have a .45 handy the next time I hear him say it, I’m going to blow my goddam brains out, believe me.