It’s simple to combat stress, insomnia, anxiety, high blood pressure, depression, and many physical ailments with their roots in a tormented psyche. Just go to Mahone Bay on Nova Scotia’s South Shore, and buy a place, rent a place, stay at one of the B&Bs, whatever you can swing – just find somewhere you can sit down – then take a deep breath and look at the scenery. That’s it. Nothing more to it.

It really works. Look – let’s say you’re frustrated and worried. Maybe work is getting you down, or maybe you’re having a mid-life crisis or something. Whatever it is that’s eating at your stomach lining, it’s going to seem a lot less relevant once you pull up a chair as the sun is setting, and look west, toward the churches (you can’t miss them), where you’ll see: 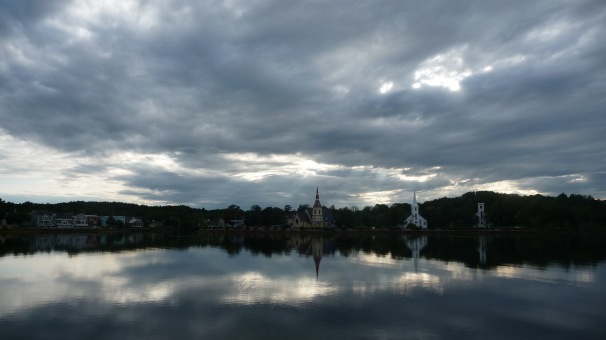 There now. Why, I bet even the photo makes you feel better. I took it a couple of hours ago, and I’d be able to take another one just like it every day if I wanted. It always looks like that, except when it’s stormy outside, I guess, though I bet even the storms look pretty around here.

I’m sure there are other ocean-side locales around the country that offer something similar, and in a pinch you might give one of them a go, but I can only guarantee the best results at Mahone Bay. I suspect you aren’t even allowed to live in a lot of the other places that boast comparable beauty, owing to their location within national parks and such. Here, once I’m done admiring the sunset, I can walk 20 yards to a nice restaurant, or a comfy pub that serves cheeseburgers. That’s the genius of it. It’s like a national park where you get to set up shop.

I’ve only been here for a couple of days now, and I’m already all squishy and sappy, with nothing but good thoughts to dwell upon. Well, mostly. I’ll probably get a bit vexed the next time Trump does something, but even The Donald seems little more than a momentary irritant when you close your eyes and listen to the lapping waves.

Is there anybody who isn’t soothed by the sound of lapping waves?

Or maybe you like watching sail boats come and go? Or perhaps watching the eagles and osprey go about their business is more your cup of tea? How about little flotillas of salt water ducks? They’re all over the bay, and they’ll quack at you in a cordial sort of way if you’re sitting near the water when they go by. Who doesn’t like a little flotilla of quacking salt water ducks? 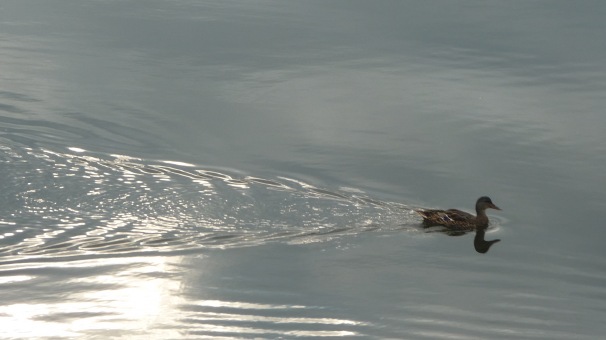 I ask you. Me, I just love watching them paddle about. They seem to do it just for fun. They seem happy. Why not? It’s fun to float there being a salt water duck.

You might not float quite as well, but otherwise you can start to feel a bit like a duck yourself. Actually, it’s fairly simple to learn the ropes as an apprentice duck, there aren’t a whole lot of skills to master. You just sit there, if you like. Paddle as necessary, or whenever the mood strikes you. You can quack, but you don’t have to.

See, it’s not that life stops throwing bricks at your head just because you’re here. It’s just that it’s easier to dodge the incoming, shrug philosophically, and not fret so very much about the next barrage.

Really, you should give it a try.