Ah, me. No more paeans to the natural beauty of Nova Scotia. Reality intrudes.

A President has to walk a fine line when there’s a natural disaster. He’s supposed to show up and look around, but not seem like a disaster tourist. He’s supposed to offer personal consolation without appearing like a baby-kissing phony. He’s supposed to reassure everybody that help is on the way, without seeming like an emperor who’ll deign, just this once, to throw a few ducats your way. The worst thing (or the worst thing you could imagine prior to the Trump administration) would be for the visit to devolve into a crass photo-op, or a display of false empathy. It’s tricky!

Obama, true to form, got it just right after Hurricane Sandy: 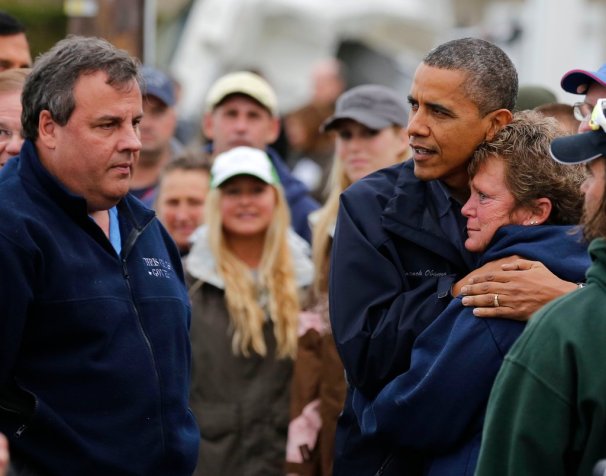 Bush, equally true to form, got the optics all wrong after Katrina:

Though in this one instance, I’ve always had sympathy for W., much as it pains me. His fly-over in Air Force One wasn’t really a product of insensitivity, nor did it prove he was utterly out of touch with the plight of the common folk. He simply wanted to see for himself, as soon as possible, and the advice he was getting was that the intrusion of a huge Presidential entourage on the ground, with all its attendant security needs – have you seen the legion of supporting personnel that has to travel with the President? – would be disruptive and counter-productive. Still, his leisurely cruise over the devastation in his big shiny airplane couldn’t help but conjure up the lyrics of Louisiana, 1927, a powerful song by Randy Newman about an earlier flood:

President Coolidge come down in a railway train

with a little fat man with a notepad in his hand

what the river has done to this poor cracker’s land?”

Not fair; but general perception wasn’t much improved by the disastrous failure of FEMA and other government organizations to respond effectively to the crisis.

Then there’s Trump. He’s really dodging a bullet on this one. He had the muzzle in his frigging mouth, but somebody slapped the gun away just as he squeezed the trigger.

His first visit to Texas bid fair to amount to a humdinger of a political catastrophe. He spent his time boasting about the turnout to hear him speak (“What a crowd!”), proclaiming that the government’s response to Harvey was the best ever, and opining that congratulations were due all around, given how marvellously the relief operation was going. He didn’t come within arm’s length of a single suffering Houstonian, perhaps in part because he didn’t visit Houston, preferring to stay in Corpus Christi. Things were grim there too, but were, you know, less soaked and smelly.

The weirdest part was how Donald kept bragging – it’s a strange word to use in this  context, but really, only “bragging” will do – about the size of the hurricane. Maybe he thought that his own grandeur would be enhanced by the sheer size of the disaster he was pretending to alleviate. Only he could set this right! Or maybe he imagines that he makes hurricanes happen, in which case this one had to be stupendous. One way or another,  though, this hurricane on his watch was the biggest and the best ever. Way bigger than that pipsqueak of a storm that Obama had to deal with.

So far, so Trump-like; after seeing him at Langley on day two of his term, bragging about his inauguration crowd while standing in front of the wall that commemorates the dead, it’s hard to be taken aback. Remember that? He more or less claimed that he’d personally stopped the rain that fell stubbornly throughout his swearing-in. (This makes sense, mind you – if he makes hurricanes, it follows that he can make the Sun shine too). His first performance in Texas was quite similar, and thus nothing more than par for the course. I’m not sure I would even have taken much note of his first Harvey hijinks if he’d left it at that.

Count on Trump to dial it up to 11! As if sensing he’d have to up his game if he wanted to keep the crowd gawking, like a circus performer realizing that his standard juggling routine was getting old, he did what any competent clown would do: he changed his shtick. If garden variety juggling wasn’t blowing their hair back any more, then he’d do it while setting himself on fire.

In a way, this was only to be expected. Tax reform – that is, granting tax cuts to the already obscenely wealthy – is the next big item on the GOP agenda. They need a win after the Obamacare fiasco, and the prospect of further alleviating the 0.01% of any responsibility for the upkeep of the society they pillage is, perhaps, the single most enticing thing that ever motivated a red-blooded Republican. Trump probably figures that if he can get Paul Ryan and Mitch McConnell to jump on board for anything, it’ll be this. It’s like dogs with squirrels. A Republican can be sitting there, scratching behind his ear, when he sees it in his peripheral vision and springs to attention: “TAX REFORM!!”

Sure. But this is the big concern while America’s 4th biggest city drowns? I don’t know why, but never, not even in my worst fever dreams, could I have imagined a President, while almost literally standing amidst the rubble, hip-deep in the rancid waters and weeping hordes of devastated citizens, taking it all in and then – holding forth on tax reform.

There’s tone-deaf. Lots of politicians are tone-deaf. We’re used to it. This wasn’t that. This – this – this was Caligula. This was something out of the Last Days of Rome.

It didn’t end there. The mental wizards in the GOP were making noises like they were fixing to rub more salt into it. You see, there was an obvious and hugely important question that now needed answering: how can you cut taxes, yet still fund the construction of the great border wall, that crucial but expensive barrier to the huge and heretofore unchecked influx of rapists and murderers? Well, the Republicans had a bright idea: you transfer money from disaster relief! I swear it’s true. I’m not fabricating this stuff. Republicans didn’t just think about it, they said it out loud, even as the flood waters continued to rise:

This time, though, somebody got through to them. Somebody explained the political realities, just in time. Maybe General Kelly broke out the hand puppets and put on a little skit.

There was, after all, every incentive to take the mulligan. Out of the blue, the suffering of Texans presented him with the golden opportunity to grab that first legislative accomplishment. Now he’ll sponsor a great big bi-partisan flood relief bill, and praise himself for being the deal-maker.

Things change fast in politics, don’t they? The talk now is that this miserable event may actually have saved Trump’s Presidency. All that loose talk about funding the wall, and shutting down the government if he doesn’t get his way, has fallen by the wayside. I bet Congress suddenly stops talking about shifting revenue from FEMA to wall-building too. Why, Donald even pledged a million bucks of his own money, philanthropist that he is. He’s gone from heel to hero. He’s safely back on Teleprompter. Here’s a big scripted smile and a wave from your rich uncle Donny, you poor, sodden, uninsured plebes.

Of course, details to follow. And of course, tax cuts for the wealthy may be off the agenda for a bit, but they’ll be back, and soon. It’s what Republicans do. It’s all they do. So prepare yourself. Dig in, it’s going to be a long, withering siege.

They’re going to claim that the real benefits of tax reform will be the poor be-knighted slobs in the vanishing middle class (not a chance).

They’re going to assert that America’s corporate tax rates are the highest on Earth (they aren’t).

They’re going to piss and moan about government waste, and how that money would be so much more useful in private hands, where it will certainly be used to create jobs, jobs, jobs (the rich and the corporations they own will just horde the windfall and do whatever the law permits to shelter it from taxation).

They’ll even – I shit you not – pull out charts and projections that purport to show how cutting taxes actually increases revenues, because of all the extra economic activity that flows naturally from handing cash to the private “job creators”. They will! Watch them! As sure as Paul Ryan cuddles up every night with his well-thumbed copy of Atlas Shrugged, that’s just what they’re going to do.

Here’s the question: do any of those thousands upon thousands of drenched and weary people pause for a moment, amid hauling all their ruined possessions and sodden drywall to the curb, and get angry that now, of all times, their President’s first gambit was to yak instinctively about the urgent priority of handing more money to the rich? Will they remember the initial knee-jerk suggestion to gut FEMA to pay for the wall? Will they watch the budget process to see if that gutting happens down the road anyway, despite today’s sudden enthusiasm for opening up the coffers? Will it occur to them that it was year after year of Republican climate change denial that contributed to their being swamped in the first place?

Stay tuned. Hurricane Harvey will – pardon the egregious pun – blow over before long, and then tax cuts will be back, under the guise of “reform”, with all prudent haste. Maybe Texas voters will put two and two together and realize that it was public money, raised by taxes, that they relied upon in their time of crisis. Maybe citizens everywhere will figure out that the proposed tax cuts won’t benefit them at all. I have a real feeling that Paul Ryan doubts it.

I hope somebody follows up on Donald’s million dollar pledge. I’d bet he’s never going to cough it up, but who’d take that action?