Nyah! Mine is Bigger Than Yours Is!

To my loyal readers (Hi Julie and Kathy!): I do realize that all this invective about Trump can get tiresome, but with material like this, what am I supposed to do? 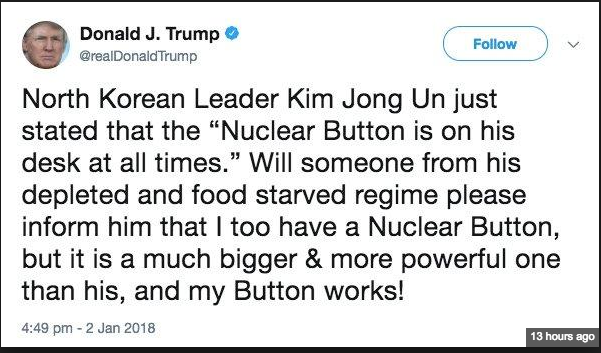 To those of us in the aging Y Chromosome camp, it was mightily encouraging to learn that Donald’s Button still works just fine. How hideous the looming spectre of a dysfunctional Button, and how reassuring to know that even as one’s nuclear deterrent starts to shed parts and leak oil, the old Button remains fit as a fiddle and good to go!

It’s difficult at this point to come up with adjectives; “Juvenile” doesn’t seem quite sufficient for behaviour that could kill us all, “surreal” seems a bit ambivalent, and so on. In the attempt, you end up strip-mining your trusty thesaurus while word-smithing multiple, increasingly frustrating attempts at the perfect synthesis: Ludicrous imbecility of a sort so base, shrill, and transparently desperate that it might have been sputtered by a ten-year-old bully trying to distract everybody from the growing wet stain in his breeches, after a bigger meanie made him wet his pants…nah…the Freudian ranting of an institutionalized village idiot now afflicted both by Alzheimer’s and Tourette’s, giving voice to the atavistic terror that his is actually the smallest Johnson in the hospital…nope…the pathological taunts of a man-child whose limited vocabulary and narrow imagination preclude the snappy comeback he so sorrowfully wishes was within his grasp…not really…more unwelcome evidence that Donald’s gastro-intestinal tract pushes in reverse…pathetic boasts that would make Melania sad, if she could just stop laughing…oh this is futile.

It was barely a year ago that the sitting President was the whipping boy of the baying clods of the Right, enraged that he wasn’t invading Iran and militarily imposing regime change in Damascus over the undoubtedly violent objections of Assad’s Russian pals. You can’t even remember that, can you? A President reluctant to embark on military adventures that his Generals didn’t want, and wouldn’t be able to finish?  An intellectual manifestly cognizant of the awesome responsibility of his office, and the dreadful power at his disposal? Wait – that was an episode of The West Wing, wasn’t it?

Well, that guy’s gone. The bag of guts that took his place is a malicious tool who only glances at his intelligence briefings if they have lots of big pictures, and mention his name. Before being elected, he repeatedly asked why the hired wonks, brought in to teach him some basics about foreign policy, couldn’t just shut up and explain what good were all those nuclear weapons, if we weren’t going to use them. He sucks up to Russia (why?, one wonders), coddles the Chinese, and insults our allies, yet froths at the continued existence of autocratic regimes in various geopolitical flash points, even while he writes love letters to the tyrant in the Philippines and the would-be totalitarian in Ankara.

So he’s stupid. No shit. But is he stupid enough to initiate nuclear holocaust in the midst of one of his little tantrums?

Do you want to bet your life that he isn’t?

Enough. He has to go, plain and simple, but how? The Constitution supplies the necessary levers, but neither the scruples nor the backbones needed by those who would pull them. Reacting to this, incredulous liberals are succumbing to a happy fantasy, which goes like this:

Come the November mid-terms this year, the Republicans will be swept from office in both the House and Senate. The New Dark Age can then be brought to a fitting conclusion. Democrats, finally back in power after all those years in the wilderness, will vote to impeach, and Trump will be removed, kicking and screaming, under the duly constituted authority of Congress. His abhorrent successor, whether it’s Mike Pence (who might also be impeached, right?) or the next witless Ayn Rand devotee in line, Paul Ryan, will thenceforth be constrained by the legislature until Bernie Sanders, Elizabeth Warren, or someone of that ilk can take back the White House. The long national nightmare, to borrow a phrase, will be over.

Yeah, well, don’t count on it. First, November is a long way away, and the American electorate is as dim-witted as it is lacking in attention span. If the Republicans are clever, they’ll do something like pass a huge infrastructure bill, one now unaffordable following the massive tax cuts they just gifted the elite, that looks just dandy but actually makes any substantial projects subject to the availability of funding – which revenue, of course, will never exist. Better yet, they’ll pass nothing, but claim repeatedly that they did, while touting its benefits to the middle class, and it’s magic creation of jobs, jobs, jobs. Or they’ll pull a stunt like mailing every citizen of voting age a cheque for 250 bucks, as an “advance on your tax break”, and any sins that aren’t yet forgotten will then be forgiven. There are any number of ways the GOP can turn today’s disenchanted voters back into the decadent, bigoted, uncritical biomass that voted them all in.

Second, everybody seems to forget how thoroughly the system is rigged. Under the Constitution – the same one that set up an Electoral College that has twice this century installed the popular vote loser in the White House – each State gets two seats in the Senate. This means that Utah, population 3 million, gets as many Senators as California, population 39 million. Arizona’s 7 million citizens get as many Senators as the 20 million in New York. This is by design. The upper house of the US Congress can never reflect the preferences of the aggregate US population. If it could, the chamber wouldn’t be evenly divided today.

Meanwhile, House districts have been gerrymandered beyond all recognition. Painstakingly drawn by Republican State legislatures to lump large numbers of Democratic voters into a limited number of districts, they look like Rorschach ink blots. Last time around, this meant that Republicans gained a thumping majority in the House even though the popular vote was almost evenly split:

This sort of outcome is made all the more likely by the largely successful attempts in Republican-controlled States to disenfranchise the voters most likely to favour Democrats, whether by imposing ID requirements carefully tailored to mandate the sort of documentation that poor people don’t have, or by permanently denying the vote to ex-convicts – in the crucial swing state of Florida, for example, ten per cent of the electorate is kept from voting this way, and other Southern states boast similar levels of disenfranchisement:

This works beautifully, because who is it that gets sucked into the prison-industrial complex? Not rich white people, not ever, and especially not since all those onerous laws were passed during the so-called War on Drugs – who gets caught holding drugs? Middle class white folk?

None of this malfeasance was made any more difficult by the gutting of the Voting Rights Act by a stacked Supreme Court:

You almost have to admire the diabolical, single-minded genius of the whole rotten scheme. It all adds up to an almost insurmountable barrier to Democratic control of Congress, absent the sort of “wave election” that can result only from an improbably sustained and widespread outrage against the current regime.

Besides, suppose the Democrats do regain power in Congress, and do vote to impeach. It still leads to nothing but a sorry, pre-ordained spectacle. People seem to think “impeach” means “remove”. It doesn’t. An impeachment is a trial, conducted in the Senate, on whether a President should be removed, and throwing the bum out of office requires a Senate vote by 2/3 supermajority. The Republicans may get their hair mussed next time around, but they won’t be reduced to a powerless rump in the Senate, and no Republican, not one of them, has the moral fibre to do what’s right. They’ve proved it time and again.

Remember, Bill Clinton was impeached. The necessary votes to remove him weren’t there. They won’t be there next time, either, even if there is a next time.

There is a chance that Democrats may draw close enough in the House to make things difficult for Republicans going forward, and if they can flip just a couple of Senate seats they could block the entire wretched Trump/Ryan agenda until the general election in 2020. It’s possible. They’d have to gain new seats while losing none that they already hold, a tall order, but it’s possible, I guess. Should it come to pass, the Republicans’ ongoing legislative smash-and-grab operation would be mired up to its wheel wells in muck, and hooray for that if it ever happens.

This would not, however, result in Trump getting the boot. The vast American nuclear arsenal would remain the plaything of an unusually cantankerous and dim-witted infant. I don’t believe his cabinet will remove him via the 25th Amendment, not even if he starts to drool and soil his diapers.

Hope for this, then: God willing, the Democrats will gain enough seats, and enough Republicans will be afraid for the fate of all life on Earth, that both chambers of Congress can pass a bill to require Congressional approval of any Presidential order for first use of nuclear weapons. This could be far more effective than one might think. It couldn’t stop Trump from calling for the football and entering the codes, but military officers are not obliged to obey an unlawful command. In the absence of Congressional approval, the order could be authenticated, but still lawfully disobeyed. The president’s current unfettered power to initiate thermonuclear attack, which I would argue is unconstitutional given that Congress alone is supposed to have the authority to make war, would at last be constrained. Such a measure wouldn’t compromise deterrence by preventing a rapid response to an incoming nuclear attack (which, perforce, must be too rapid to consult Congress). It would only prevent the United States from being the first to launch its own attack at the discretion of the President. This wouldn’t be without its geopolitical problems – the neutering of the latent threat to hit first could be detrimental in certain types of international crisis – but present circumstances make a compelling case that it should have been done a long time ago.

The problem is, any such bill would be subject to Trump’s Presidential veto, which the Democrats, and whoever they can bring along with them, will probably lack the votes to override.

Sweet dreams, then. Oh, and Shug – say your prayers.

2 comments on “Nyah! Mine is Bigger Than Yours Is!”