IMPEACH THIS MORON NOW (before it’s too late)

Leave aside that’s he’s a career money laundering fraudster, up to his hips in greasy Russian swag. Leave aside that whether it can be proved or not, you’re a fool if you think he didn’t collude with a hostile foreign power to rig a Presidential election, and get yourself comfortable, even, with how he’s been Putin’s mewling bitch from the get go. Leave aside the sexual assaults, and the corrupt profiteering from his office in open and flagrant violation of the Constitution. Forget how stupid he is, how corrupt, incompetent, and generally awful his cabinet appointees, how damaging to the institutions of democracy his tenure has already been, and will be. Imagine, as does, apparently, the Republican Congress, that none of this amounts to a case for removing this sentient picnic ham from office. The ultimate case for impeachment is that he might well get us all killed, for real, because in his latest move to kick the adults out of the room, he just fired H.R. McMaster and appointed this guy as National Security Advisor: 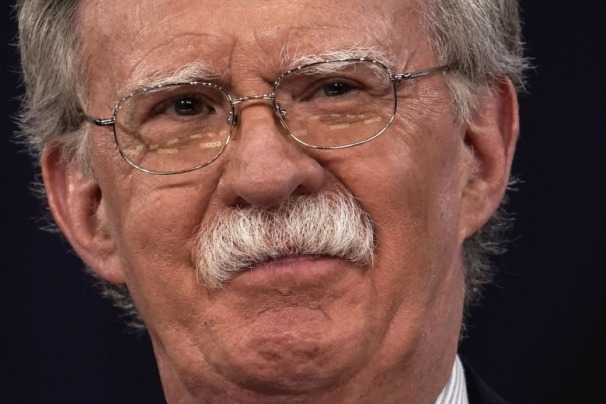 His name is John Bolton, but it might as well be Lucifer; he has the Mark of the Beast upon him. He makes Dick Cheney look like a moderate. He makes Don Rumsfeld seem like a pacifist isolationist. Stalin was more temperate and reflective, McCarthy more honest, Nixon less bitter and conniving, Bin Laden less self-righteously dogmatic. He’s the kind of guy they’d have washed out of Gestapo school for being too creepily intense. He’d be dangerous in the service of an intellectual colossus determined to keep him on a tight leash; running loose in the employ of an idiot like Trump, in command of America’s foreign policy apparatus, he’ll be a gun to our heads while Trump spins the chambers in a demented geopolitical game of Russian roulette.

You think I exaggerate? That’s fair, maybe you don’t know me, and I may be full of crap, so ignore what I say and listen over the next few days to what’s bound to grow into a howling, terrified chorus of reaction from the world’s foreign policy illuminati. Fred Kaplan, the well-regarded writer for Slate, and not one for shrill over-reaction, has already weighed in:

Respected pundit James Fallows, a frequent foreign policy contributor to the Atlantic, has chimed in, as has former Ambassador to Russia Michael McFaul, who was just on Rachel Maddow’s show, and it isn’t yet 10PM as I write this. There are bound to be dozens of similar reactions from across the spectrum, throughout the political and academic communities over the next day or so – it will be interesting to see what Lindsay Graham and John McCain have to say, now that it’s gut check time.

But heck, don’t listen to them either. All you need to know is that Bolton has repeatedly called for military action to deal  with both Iran and North Korea, and we’re not talking years ago – Bolton’s most recent op-ed calling for pre-emptive strikes on North Korea appeared on February 28:

Just what we need! More wars! Bolton comes on board just as Trump prepares to meet with Kim Jong-un, and just as the Iran nuclear treaty comes up for recertification. Oh boy.

Sadly, National Security Advisor is one of those positions that falls through the Constitutional cracks, and isn’t subject to Senate confirmation, so we can’t impose sanity that way – but there’s still an obvious and easy way to head off Armageddon. Impeach Trump now. Right now, before it’s too late – Bolton’s appointment isn’t effective until April 9 (I know, I know, you can’t really impeach anybody that fast, but at least we could get the ball rolling before the mad dog even takes his desk). A President’s choice to head the NSC, however terrifyingly I’ll-advised, may not be grounds to remove him from office (though if you read the Federalist Papers, actually, it might: Impeachment), but being scared to death by that choice ought to be impetus enough to use all that other Trumpian malfeasance as a convenient excuse, even if you’re a Republican and otherwise inclined to give Herr Trump a Mulligan on the destruction of everything else that decent folk hold dear. They got their cruel tax break for the obscenely wealthy. The dummy has served his purpose. Maybe, then, even for a group of mendacious cowards as craven as the Republicans, the arrival of Bolton can be the last straw?

After all, how will their billionaire buddies spend all that filthy lucre, if there’s a nuclear holocaust, and they have to share a fate with all the rest of us, for a change?

P.S.: Lindsay Graham, as ever, has been a disappointment, praising Bolton as someone likely to dismay America’s enemies. I suppose he’s right in that score. Following up on the anticipated chorus of horrified commentary, here’s todays editorial from the NYT:

The Times on J.B.

And this is from a hawkish defence/national security blog that I frequent: