The Dems Made Us Do It!

a) overtly and deliberately mandate something so cruel and wicked that even Ted Cruz is taken aback: and

b) defend himself on Fox News by cramming all of his appendages into his mouth thusly: “It’s a real exaggeration. In Nazi Germany, they were keeping the Jews from leaving the country.”

Thus speaketh Attorney General Sessions. Attaboy, Jefferson Beauregard! You may be separating children of tender age from their parents and putting them in detention camps, even when mom and dad have broken no laws at all, but merely presented themselves to authorities at a port of entry to claim asylum, but the Nazis were worse, so it’s OK.

Admittedly, that’s a pretty low bar, and your more weak-kneed liberal types might bleat that it’s not much of a defence of any policy to say that it’s still not as bad as Auschwitz, but look, something had to be done, and it was bound to be ugly. No way around it. Rapists, murderers, and recruits for MS-13 were streaming over the border, most of them, cunningly, in the guise of destitute mothers and their children, and it was totally an existential crisis. Can’t those pinheads understand that if you don’t lock up everybody who tries to get in, you might as well not even have a country? This isn’t difficult to grasp, dim-bulbs. If we kept sitting on our hands like that African guy who used to run the joint, it wouldn’t be long before the blessed United States ceased to exist, except as a parking lot for huddled frickin masses yearning to breathe free.

Wait, did we say the child separation policy was an ugly necessity because we had to do something to rectify the God-awful mess that President Kunta Kinte left us to deal with? What we meant was, there is no such policy. 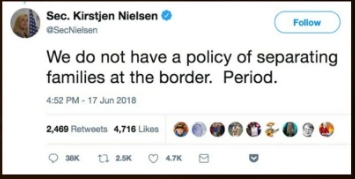 No, hang on, what we meant was, this has always been the law, so why’s everybody so upset at us? It was those awful Democrats who commanded this, and we’d change it if we could, but they won’t let us!!

We’re just as upset as you are. We agree it’s terrible – no, hold the phone, it’s not terrible, because this kind of thing is what Jesus wants, which you’d know if you just read your Bible (supposing you have one, you atheist liberal degenerate):

Also, though it’s a great policy ordained by God Almighty Himself, let me reiterate, we desperately want to change it but the horrible Democrats won’t let us: 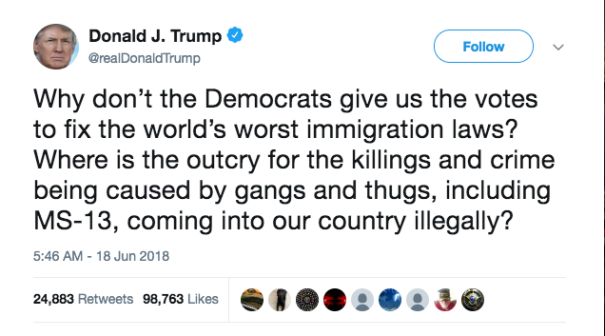 Shit, I almost forgot, NO COLLUSION!!

I guess we’re lucky that it hasn’t occurred to them yet to blame Justin Trudeau.

I keep waiting for that one big gaffe, that one hugely evil transgression, that will finally push us over the top and flip Donald’s base. Enough people are upset by the family separation horror show that you could be forgiven for hoping that this time it’s happened. I’m hoping so too. They clearly are squirming – yesterday, even Sarah Huckabee Sanders couldn’t stand it any more, and refused to do the press briefing, forcing Secretary of Homeland Security Kirstjen Neilson to crawl out there in a flak jacket and face the music herself. Yet Kirstjen was unrepentant, and she and everybody else from Trump on down are continuing to run with the lie that this is all the Democrat’s fault, not only because this is their law, but they refuse to change it, and you can tell the Trumpians expect to be able to ride this one out. Donald seems to think he can even leverage this to get his goddam wall funding, finally. It’s like he just sent the Dems a note made from glued-on letters cut out of the newspaper: FuND tHe WALL or tHe KIds GEt IT.

Hope away, dear readers. Hope against hope. I can’t help it either. Remember, though, it’s the hope that kills you.

Here, pick up something pointy and console yourself: 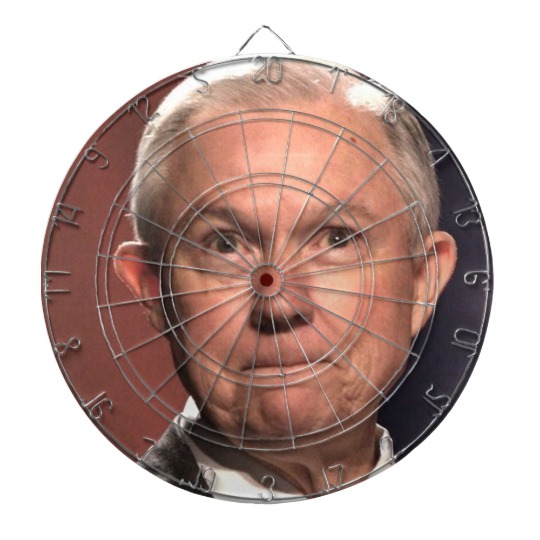 One comment on “The Dems Made Us Do It!”