Songs of the Atlantic

My very dear friend Susan recommended on Facebook that I listen to East Coast music, the most appropriate aural backdrop to my current situation. It reminded me of an old Songs of the Day entry, sent originally to a few Toronto co-workers, which I reproduce from the archive:

I felt it time, in my vaguely irritating and paternalistic way, to expose you to some music of the East Coast. Bear with me, for some reason I feel the tug of the ocean most keenly today, and wish I could make you understand.

A song I just discovered.  This is a lovely treatment of an old sailors’ tune, they’re called “sea shanties”, songs that were chanted by crews engaged in hard work, typically hauling on lines — they’d work to the rhythm to coordinate their efforts. They’re actually categorized according to the kind of task performed when sung, and this one is a “halyard shanty”, a halyard being one of the ropes, all of which had disinctive names (we still use “lanyard” these days as common parlance for any sort of rope that gets pulled). Their origins are generally impossible to pin down.  Curiously, shanties often refer to a mysterious “Ranzo”, or “Renzo”, as does this one, and this derives from a mythical Ranzo, sometimes Reuben Ranzo, who serves as the protagonist in all sorts of shanties, so Google tells me.  It’s thought that “Renzo” may be an abbreviation of “Lorenzo”, as Portuguese sailors from the Azores were common among the crews of whaling vessels, but nobody really knows.  Of course the word “shanty”, like the English word “chant”, itself has a connection to the French “chanteur”.  The culture of the sea has no nationality.

It sounds like an ancient Celtic lament for loved ones lost at sea, and in a way it is, but it was written around 1990, by Jimmy Rankin of Mabou, Cape Breton, Nova Scotia.  The Rankins really are a family, and their Wikipedia article says that the girls run a pub in Mabou when they’re not singing.  One of the boys, John, died in a car crash about 15 years ago, it was big news out east.  Digging around, I was saddened to discover that one of the girls, Raylene, just recently died of cancer.  Great. I really should learn to stifle my curiosity.

In a way it’s sacrilegious for me to pick Lightfoot’s version of this one, he’s a landlubberly Ontario clod-hopper from frigging Orillia, for the love of Christ, but he does a nice job of it. This is pretty much the national anthem back home, recorded by dozens of artists over the years.  We were taught to sing it in school, and told the story of how an amateur historian and folklorist named Helen Creighton heard it sung in the parlour of a kindly woman, a stranger, who’d invited her to get in out of the rain.  This was back in the early 1930s.  Local folk songs like this were passed on as part of oral tradition, and Helen was the first to transcribe it, possibly saving it from being lost to history.  Its chorus is now engraved on every Bluenose heart.

God damn it to Hell if this isn’t another maritime classic sung by a land-locked Ontarian, and even worse he wrote the bloody thing. However, he used to spend his summers in Nova Scotia, and his parents were Nova Scotia ex-pats, so I claim him as one of our own, and moreover when he died – in a lousy twist of fate from smoke inhalation in an Air Canada DC-9 that caught fire in mid-flight – his ashes were scattered in the Atlantic off the Nova Scotia coast.  Therefore, Ontarian my big white Bluenose backside. The song is full of plausible sounding details of wooden warships and combat at sea, and written in what sounds like the argot of 18th century sea-faring, so many people take it to be an authentic shanty of that era, but nope.  Stan wrote it in the 70s, no doubt about it.

A “privateer” was a mercenary, in effect a pirate, but an honourable one; they were civilian sea-farers commissioned by the Crown to harass enemy shipping, under a licence called a “letter of marque”, as mentioned in the song.  Halifax was, as the lyrics suggest, a home port for many during the Revolutionary War, when loyal Englishmen fought upstart Americans on the high seas. We fought them again, during the war of 1812, when HMS Shannon triumphantly towed the captured USS Chesapeake into Halifax harbour, after a gunnery duel between the two frigates ended with American defeat. Glorious. Such things spring to mind when you were brought up amidst all that naval history, Stan starts singing and your blood rises as you think about the Royal Navy maintaining Pax Britannica on the world’s sea lanes, and convoys forming up in Bedford Basin, watched over by corvettes and destroyers riding shotgun in the long struggle with Nazi U-Boats, likely to be encountered lurking just offshore.  You Upper Canada folk who think those damned lakes out there are impressive bodies of water might be unmoved by Barret’s Privateers.  Ah, but what can be done for you, you’re from away. 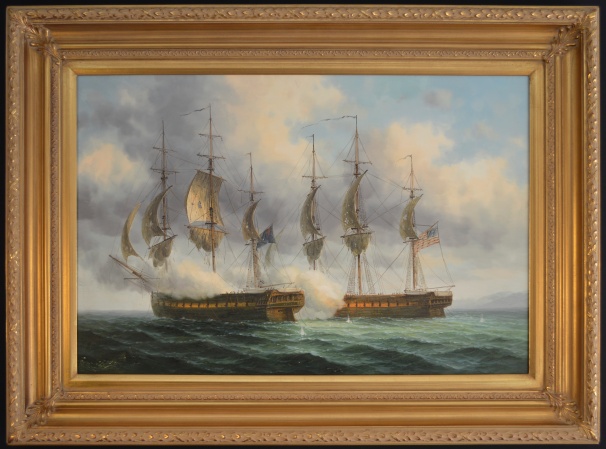 2 comments on “Songs of the Atlantic”